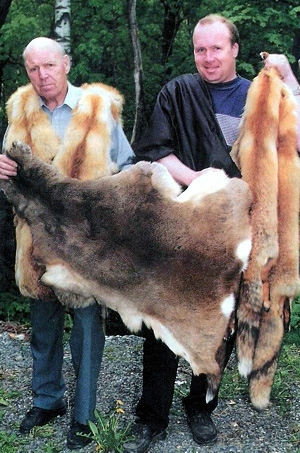 When Roar Amundsen founded his tannery in 1945 he had 14 competitors in the Oslo region, today his son Jørn has taken over the business and Roar Pels is now the only tannery in the region.

Roar Amundsen started in 1942 his career as an employee in Nordisk Skinnforening (Nordic Skin Association) in Sandvika, outside Oslo. This was the place where he learned the tannery business. After the war in 1945 he started up his own business, Roar Pels. He started in the cellar at home, bought some used equipment and built some machinery by himself. It was tough times with a lot of competition between all tanneries in the region. In the beginning he had 7 employees sewing slippers and socks, the only problem was that he only had one sewing machine, so 6 of them had to sew by hand. They often had working hours from 6 o’clock in the morning to late evening. The company had to be built up from scratch. Roar bought sheepskin and produced jackets and warm slippers for hotels in the Norwegian mountains and also produced warm jackets for the Norwegian Department of Defence.

Main customers, farmers and hunters
In the beginning Roar Pels had wholesalers of skin as his main customers, over time he had to find new customers and today the largest customers are farmers and hunters. As a part of the production they started up by buying skin of fox, moose, marten, reindeer and other wild animals. Roar Amundsen bought machinery from all competitors closing down, and as a result of the expansion he had to rebuilt 8 times to get the space he needed. Roar Amundsen underline that hard work always has been the main focus for the company.

Tanning of skin from wild animals
Jørn Amundsen, who’s running the business today, is a dedicated hunter and knows all about tanning skin. The customers today are mainly farmers and hunters, you can deliver skin and you receive them back tanned. The company is also buying skin for resale.

“I am a lucky man who has taken over a well-established business. Now I put all my honour and efforts in to taking care of the family traditions"